I’ve been sick this week, caught some bug that was doing the rounds and was feeling rubbish.  I’m lucky to have avoided most of the colds and flu that has been circulating all winter, I put it down to eating clean most of the time.

Since I got sick I’ve been drinking LOADS of green juice.  I’ve been using a few different recipes, but this is my standard version I use all the time. 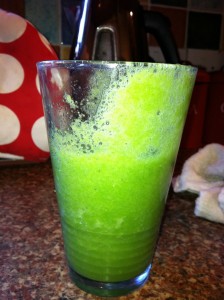 1 banana (the riper the better)

juice of a lemon

half a bag of spinach

parsley, basil or coriander (depends on what I have at the time)

sometimes I throw in some blueberries

It’s easy to make, you don’t need a juicer – I just throw it all in the blender and blend until it’s liquid.  You can add water until it becomes the desired consistency.

I drink this all year round, not just when I’m ill.  It’s great to have first thing in the morning as a shot of vitamins to start the day.  Really energises you and gives you a boost.

The juice will keep in the fridge for a couple of days, or you can freeze it and defrost it the night before to have it ready for the morning :).